The treatment plant is a vital part of the wastewater system, helping to keep our community livable and protect the environment.

The treatment plant receives and treats roughly 8–10 million gallons of wastewater per day from homes and businesses. An estimated 120,000 residents living in unincorporated Clark County and the cities of Battle Ground and Ridgefield rely on this important facility every day.

The Salmon Creek Treatment Plant is the last part of the wastewater conveyance system. All sewer pipes and pump stations are designed with one purpose: to reliably carry wastewater from homes and businesses to the treatment plant. Wastewater is then treated to regulatory standards and released back into the environment (see below for more information).

The plant is an essential part of our public infrastructure. It serves 50,000 homes and businesses in our service area. Our highest priority is keeping the plant operating to industry standards, while meeting all environmental regulations. The plant has 19 full-time staff, including managers, maintenance technicians, certified operators, and a laboratory coordinator.

To ensure the plant operates in a safe, reliable and cost-effective way, all plant operations are monitored 24 hours a day, 7 days a week through a modern, automated computerized control system. Backup generators ensure operations run consistently at all times, even in the event of a power outage. The entire perimeter of the site is fenced for safety.

In 2020, the Washington Department of Ecology honored the Salmon Creek Treatment Plant for 100 percent environmental compliance. The State’s “Outstanding Performance” award recognized the plant’s operators for completing the previous year without a single permit violation. This was the thirteenth consecutive year the plant has been honored for a perfect environmental record.

Being a Good Neighbor

The Salmon Creek Treatment Plant has served the community for more than 40 years. The treatment plant serves the community and strives to be a good neighbor. This includes managing traffic by instructing staff and contractors to drive slowly on access roads and providing neighboring residents with advance notice of higher-traffic periods. It also involves informing the community on the important role of wastewater treatment in protecting public health and the environment. We offer plant tours to students and community members.

Our operators take great care in minimizing odors by keeping the treatment processes balanced and installing air treatment systems in particular areas. There are, however, certain times during the year when odors may be detected by residents close to the facility. These times are generally: during summer and early fall on days with little or no wind; in the evenings when residential use peaks; and during periods of active biosolids hauling in the summer months. Low water levels in the marsh areas surrounding Salmon Creek can emit an earthy smell that is often confused with wastewater treatment. This also typically occurs in the warmer summer months.

Prezi: Click the arrows or map features for more information; hover over the right side of the window to see additional controls.

What Happens at the Treatment Plant

Preliminary treatment involves screening out objects such as personal hygiene products, wipes and other debris. Trash that is removed from the system is taken to the landfill. Each year, almost 200 tons are removed. After the flow passes through the screening systems, it is ready for the primary treatment process.

In the primary treatment phase, settling of the wastewater by gravity is used to efficiently remove more than half of the solid material coming into the plant. These solids settle to the bottom of the tank and are transferred for further treatment during Solids Processing.

Secondary treatment creates ideal food and oxygen conditions that allow bacteria and other microscopic organisms to work quickly and efficiently to digest dissolved waste, just as they would normally in the natural environment but on a much larger scale. At the end of secondary treatment, nearly all waste has been removed from the water.

Disinfection is the final step in the liquids treatment process. Instead of chlorine, which was typically used in past decades, the plant uses ultraviolet lamps. This is a safer process than chemical disinfection. Water passes through chambers containing ultraviolet lamps that kill any remaining disease causing bacteria and pathogens.

Following treatment, effluent (treated wastewater) from the plant is transported by pipeline and discharged to the Columbia River via an underwater diffuser, an underwater mechanism that dilutes and mixes effluent into the river. The State of Washington’s Department of Ecology closely monitors this process to ensure that all effluent meets strict environmental standards. The diffuser is periodically inspected by a diver to ensure efficient operations.

All solids collected during the main treatment process are further processed by mixing and heating for one month in large tanks called digesters. This process is called anaerobic digestion, where microorganisms further stabilize the organic material in a similar process to composting. This treatment meets state and federal standards and results in a final product called biosolids, which have beneficial agricultural uses. 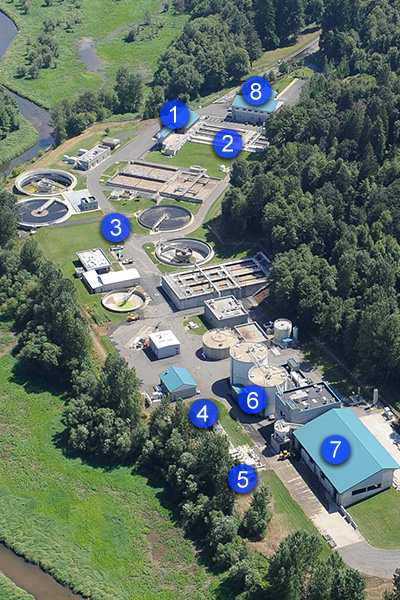 Biosolids can be used as a nutrient-rich fertilizer that reduces soil erosion and provides micronutrients and nitrogen to the soil. Biosolids removed from the plant are regularly applied to nearby farmlands. During dry weather, about half of the biosolids are taken to farms near Woodland. During the remainder of the year, biosolids go to other farms near Goldendale, where the weather and agricultural practices can support a nearly year-round operation.

Plant operation requires constant monitoring and quality control testing. Liquids and solids are carefully monitored by certified operations staff and tested and evaluated at each stage of the treatment process to ensure compliance with stringent regulatory requirements.

The plant is owned by the Discovery Clean Water Alliance, which is a partnership consisting of Clark County, the Clark Regional Wastewater District, and the cities of Battle Ground and Ridgefield. The Alliance was formed in 2013 to jointly manage wastewater infrastructure critical to the region’s economic and environmental health. By connecting systems through one regional treatment plant, partners can meet future service demand without paying for redundant facilities in each jurisdiction. In addition to reducing cost, this helps make our area better prepared for economic growth by having readily accessible capacity, while at the same time protecting the environmental health of the region with the most robust infrastructure.

Services for the treatment plant are provided by two of the Alliance’s member agencies. Clark County Public Works operates and maintains the plant. Clark Regional Wastewater District is responsible for engineering and capital planning, as well as the overall financial and administrative functions of the Alliance. Leveraging existing agency capacity is the most efficient way to manage the treatment plant and supports the Alliance’s goal of maintaining low, stable rates for all customers.

Planning for the Future

The capacity of the treatment plant is currently 15 million gallons per day. While this is considerably morethan the current average daily flow of 8-10 million gallons, our community is continuing to grow and the Alliance anticipates that an expansion will be needed in the near future. The planned Phase 5 expansion will help accommodate this growth by providing additional capacity and continuing to safeguard our environment.

Several elements of the Phase 5 expansion are currently underway. One element will replace and improve the outfall infrastructure that carries and discharges clean, treated wastewater into the Columbia River. Another component of the expansion will add additional treatment facilities within the existing plant footprint to increase the plant’s capacity from the current 15 million gallons per day to approximately 17.5 million gallons per day. As part of this project, an odor containment and treatment system will be built to serve the Preliminary and Primary Treatment Facilities at the plant.

This work will take place over several years and will be performed as two separate and independent projects. These long-term investments are an important part of our plans to continue providing reliable service at a stable, affordable rate. 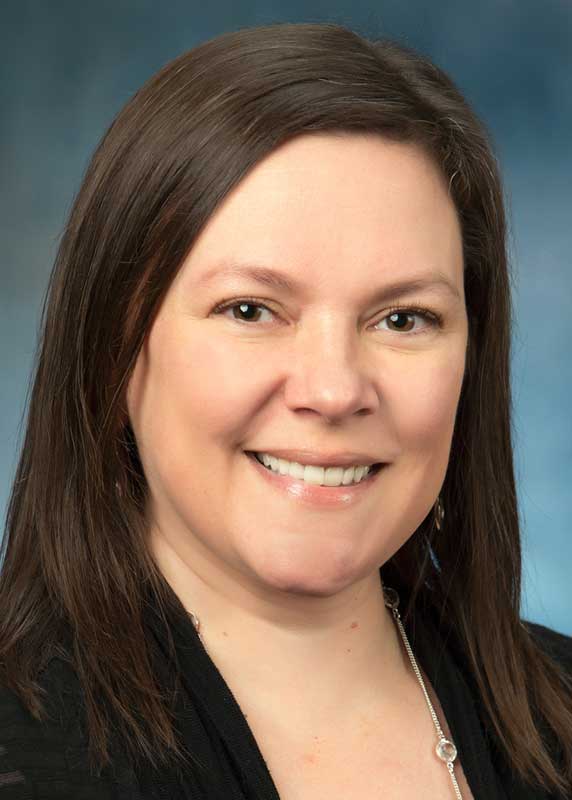 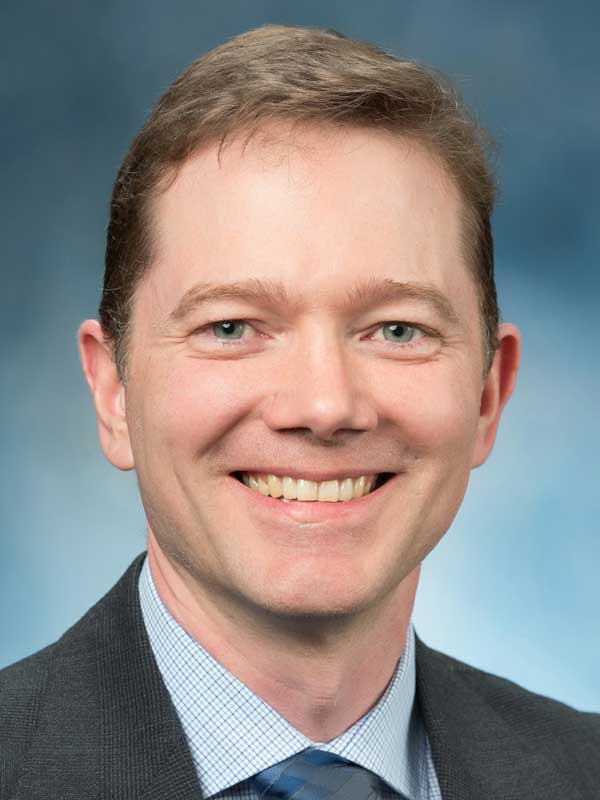